Students may enrol under the FREE IELTS SCHEME. Under this scheme, if a student has enrolled in a university represented by Prolific and applies for visa with that university offer, then he/she is entitled for a refund after net deduction of taxes and cost of official course ware.

The refund is applicable whether visa has been granted or not.

The Full Course at Prolific provides you with 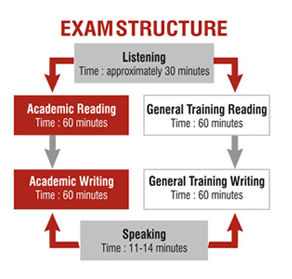 In actual examination, Listening, Reading and Writing are conducted back to back. This examination lasts for approximately 2 hour and 45 minutes.

The module comprises four sections of increasing difficulty. It takes 40 minutes: 30 – for testing, plus 10 for transferring the answers to an answer sheet. Each section, which can be either a monologue or dialogue, begins with a short introduction telling the candidates about the situation and the speakers. Then they have some time to look through the questions. The first three sections have a break in the middle allowing candidates to look at the remaining questions. Each section is heard only once. At the end of this section students are given 10 minutes to transfer their answers to an answer sheet.

This module judges your comprehending skills. Multiple passages are given from literatures and you are required to answer variety of questions based on the given passage.In the academic module the reading test comprises three sections, with 3 texts normally followed by 13 or 14 questions for a total of 40 questions overall. The General test also has 3 sections. However the texts are shorter, so there can be up to 5 texts to read.

This module judges your compatibility with English language. Generally it is not on the same say of your LRW (Listening, Reading and Writing) test. It is your one to one conversation with the examiner.The speaking test contains three sections. The first section takes the form of an interview during which candidates may be asked about their hobbies, interests, reasons for taking IELTS exam as well as other general topics such as clothing, free time, computers and the internet or family. In the second section candidates are given a topic card and then have one minute to prepare after which they must speak about the given topic. The third section involves a discussion between the examiner and the candidate, generally on questions relating to the theme which they have already spoken about in part 2. This last section is more abstract, and is usually considered the most difficult.

IELTS is graded on a scale of 0-9, which is known as band scale. Usually 6.5 bands overall and not less than 6 bands in each module is required, which opens your doors of abroad education in your desired country.

Which materials will I use?

What support do I get outside class?

Why are there two versions of the IELTS test?

What documents can I use as ID (proof of identity) at the test centres?

You need to produce a valid passport when you appear for the test.

Who sets the 'pass' mark for the IELTS test?

There is no pass or fail in IELTS. Scores are graded on the 9-band system. Each educational institution or organisation sets its own level of IELTS scores to meet its individual requirements. To find out more, search the list of organisations which accept IELTS scores.

How soon can I re-appear for the IELTS test?

There is no restriction on when you can re-appear for the test. However, IELTS recommends that you reflect on your result and make additional preparations before attempting the test again.

Is the IELTS test completed in one day?

The Listening, Reading and Writing components of the test are always completed in continuous sequence, with no break. Depending on the test centre, the Speaking test may be taken prior or after the main test date.

What is the IELTS Speaking test?

Nature of Test: Paper based test